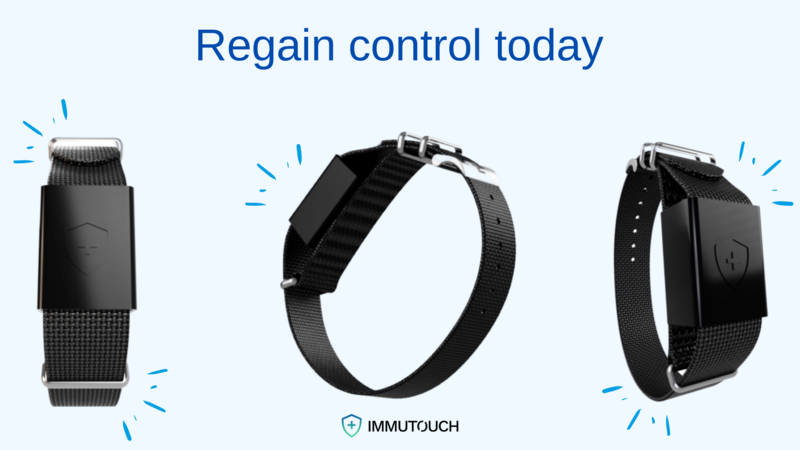 We are excited to tell you about our newly-released product, Immutouch Habit. The smart band to help you quit nail-biting, skin picking, hair pulling, and other habits.

After the positive response from the release of our original Immutouch band, we have decided to launch a version specifically to break your habits. The Immutouch band was made to help prevent the spread of germs and disease by making you more aware of touching your eyes, mouth, and nose. But, our smart band vibration technology is capable of much more than this, which is why we introduced Immutouch Habit.

With Immutouch Habit, you can still personally calibrate the band using your own touchpoints, but with the ability to program all sorts of habits, not just face touching. Along with this release, we have rebranded our original protecting Immutouch band to the Immutouch Guard, making it easier for our customers to determine what kind of band they need.

The Immutouch Guard helps to protect you from disease, a brainchild of our three founders during this pandemic. The Immutouch Habit helps you reach your goals of quitting your bad habit.

Just like remembering not to touch your face, we know breaking a habit is a hard thing to do. Using vibrations, both of our bands keep you aware of your movements and actions.

Learn more about the Immutouch Habit and what it can do for you here, https://immutouch.com/habit

Or explore the rest of our site and Immutouch Guard here, https://immutouch.com/